Home /Concealed Carry/What To Do After A Shooting?

Part of being a responsible gun owner is learning to avoid defensive situations at all costs as well as preparing for those encounters if they can’t be avoided. While many responsible self-defenders purchase a quality firearm suited for the job and seek out training from competent instructors, many don’t prepare for what happens after a shooting.

Using a firearm (or any weapon for that matter) to defend you or your family’s life will likely be one of the most traumatic and stressful experiences you could ever encounter. Many different emotional and physical factors can alter your perception of the events that transpired, even immediately after the shooting. It’s important to think about what actions you should and shouldn’t take beforehand.

I’ve prepared a 4 point list of what to do…

Though the shooting may have stopped at that moment in time, that doesn’t mean that additional threats aren’t still there. Many times attackers work in groups, some of which you may or may not know were around in the first place. Friends or relatives of the person you shot may be there at the scene, and they aren’t going to be happy with what has transpired no matter how in the wrong their loved one may have been. Be vigilant in assessing the situation immediately after the shooting. Try your very best to stay on the scene, but if you need to flee in order to be safe then DO SO!!! This can lead to a sticky situation legally in some cases. When it comes to the law you always want to be right, but you don’t want to be dead right!

If you absolutely positively have to secure or move the attacker’s weapon then do so, but exercise extreme caution! Avoid coming in close proximity to the attacker. If you can, use your feet to move the weapon rather than placing your hand (and thus, your fingerprints) on it.

Once you are 100% certain that you are safe, HOLSTER YOUR WEAPON!!! There is a good chance that other people have already called 911 and the police are on the way. You DO NOT want them to show up while you still have a firearm in your hand. Remember, they are responding to a “person with a gun” or a “shots fired” call. They don’t know who the good guys and bad guys are when they show up. 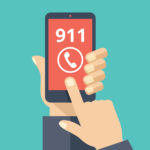 Even if you know that someone else has called 911, you still want to make the call yourself. This aids in you being thought of as the complainant (victim) from the beginning. Inform them that you were required to use a firearm to defend yourself, whether or not someone is hurt and needs medical attention, and give a detailed description of yourself so that the police know what you look like when they arrive.

Again, when the police arrive on the scene you SHOULD NOT have a firearm in your hand! Place your hands in the air and follow any and all instructions that are required in order to detain you (which they will definitely do). 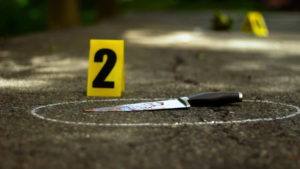 Once you are safe and the police have been called, start making mental notes of the evidence around you. Where is the attacker’s weapon (if they had one)? Are there witnesses around who can inform the police of exactly what happened? Evidence that works in your favor can quite literally walk away!!!

Don’t assume that your situation will be a clear cut case of self-defense! There are MANY people serving time in jail after being violently attacked simply because they weren’t able to “prove” that they justifiably used a weapon to defend themselves.

Once the police have arrived and detained you, you will be questioned about the shooting. There is a good chance you will also be taken to the police station and you may even be read your rights. No matter what happens, be polite!!! Inform the officer that you were required to use your firearm in self-defense and that you want to fully cooperate with their investigation, but that you need to consult legal representation before giving a full statement. At that point, stop talking! I CAN NOT STRESS THIS ENOUGH!!! Seemingly benign statements can be the fuel that a prosecutor needs to turn what otherwise would have been a self-defense case into a criminal charge against you.

Call an attorney as soon as they allow you to. Don’t wait until you are in the moment to try and find representation! This is something that you should have already secured. Be sure to select someone who specializes in self-defense cases. Also, know what their retainer fee is before hand as they won’t represent you until that retainer has been paid.

Self-defense insurance is an excellent idea, as you will be provided with an attorney who specializes in self-defense shootings (on call 24 hours a day depending on the insurance), includes funds for bail, judgements for civil suits, and is relatively inexpensive. There are a handful of companies that provide self-defense insurance. I’ve reviewed several, and can only recommend three companies…US Concealed Carry Association, US Law Shield, and CCW Safe.  See my comparison of the three companies here.

2 thoughts on “What To Do After A Shooting?”